A Palestinian Christian Voice from the Holy Land

I have been asked several times what I feel I have accomplished in my trips to Palestine. I feel like I have stumbled through my answers a bit, since there is nothing solid or concrete that can be seen or touched.  Plus finding “firm ground” after this trip has been harder than with past trips.

A friend’s Facebook status helped me find the words I was searching for when he quoted Parker Palmer (a Quaker philosopher / author) - Rendering other people invisible or irrelevant is an act of violence. Palmer was listing a variety of ways we do violence other than physically. I can testify that through recent personal experience this is a very potent one.  I think being hit physically would be easier to deal with and get over.

What does that have to do with what I accomplish through my trips to Palestine? Just as rendering someone invisible or irrelevant is potent; so is making it known that they are seen.  That is what I and a host of other volunteers accomplish. I can’t focus on the macro level of politics – that is not my skill set. But, I can focus on the micro level of person to person connections. First showing Palestinians and those that work with them for justice, that they are seen and heard; and second to raise up their voices at home for others to hear – like all the Whos in Whoville yelling “We’re Here, WE’RE here, WE’RE HERE!!

In 1948 more than 500 villages and all their Palestinian population was made invisible at the founding of the State of Israel – “A land without a people for a people without a land.” A friend that was born in the village of Albassa in the northwestern Galilee wrote his family and village story about how they were expelled in 1948 and the village destroyed. Although he has visited his ancestral home, he is not allowed to return to his family’s land to live.  He has given me permission to post his story and I am honored to help make it visible here.

I am privileged today to share with you the tragic events that led our family in May of 1948 to flee the Albassa village, my birth place, in Northwestern Galilee, Palestine. In addition, I’ll try to give you an idea about the kind of life that the disposed Palestinian refugees live in exile since 1948.

My full name is Nimer Simon Haddad. One can derive many things from this name. Haddad as a family name is one of the oldest family names in the Middle East. It could be Jewish, Christian, or even Moslem family name. The Old Testament indicates that the name Bin Haddad as King of Damascus BC and as the name of a God BC. It’s thought that Haddads as well as some other Christian Palestinians  were descended from Jews of Jesus’ era who had believed in Jesus as the Messiah and who had chosen to stay in the Holy Land. In addition, the Evangelist Luke reports in Acts 2:11 that Arabs were among the first Christians of the Holy Land.

Albassa Village had an old history that goes back to the time of the Canaanites and Phoenicians. The Village stood on the slopes of a rocky hill and faced west toward the Mediterranean Coast. Its name may have derived from the Canaanite “Bissah” which means swamp. It was called Bizzeth during the Roman Period. 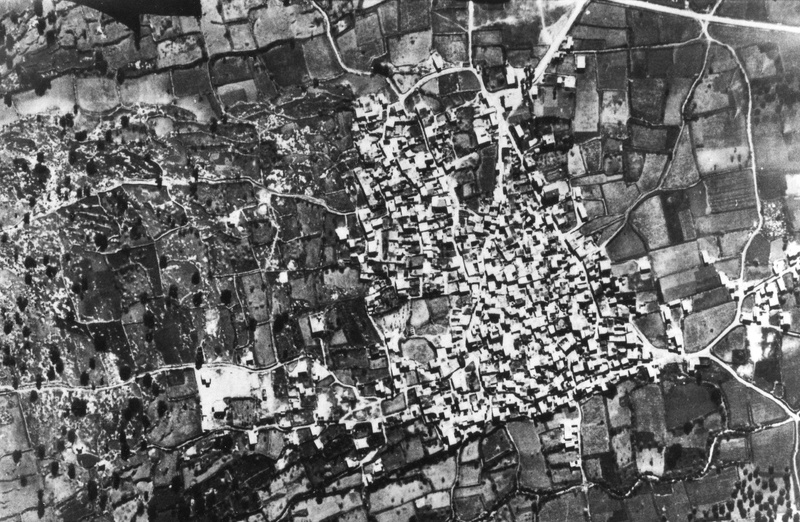 Antiquities were found inside and outside the Village. Inside, were the remains of ancient village mosaic floors, and rock hewn tombs. A Christian burial place was unearthed  in 1932 by the Palestine Department of Antiquities; it contained coins and glass that dated  back to the fourth century AD.

Prior to 1948, Christian Palestinians lived peacefully with Jewish and Moslem Palestinians. During the First World War, when the Ottoman Empire was allied with Germany, the Sultan started drafting young Palestinians to fight on their side. My father was at that time 18 years old. Realizing the senseless war, my grandfather allowed his only son to immigrate to Argentina, in South America. In fact, my father was escaping the draft. Tens of young Christians from Albassa joined him on the three months long voyage from Palestine to Argentina. He lived seven years in exile until after the war was over. When he decided to return to his homeland Palestine, the British Mandate Government, who replaced the Ottoman power never disputed my father’s right to return to his homeland Palestine.

As soon as he returned to Albassa Village, he took over his father’s role as a farmer, who worked very hard on his cornfields, tobacco plantation, olive yards and harvests. Shortly after returning to Albassa, he got married and raised a Christian family. The fertile land that my father owned was close to the Jewish settlements of Hanita and Maasouba that were established in the 1930s. My older cousin, Yousef Haddad, told me  that he used to play volleyball with Jewish young men of Hanita and was on good relationship with Mr.Yohna, the mayor of Hanita settlement. My father never mentioned anything bad about the Jewish settlers who lived in the neighbouring Hanita and Maasouba. He always talked to them and was on friendly neighborly relationship with them.

The peaceful coexistence among the members of the three Abrahamic faiths, the Christians, the Moslems and the Jews, had changed drastically after the British Government’s plan, to establish a homeland for Jews in Palestine was begun. Great Britain declared that it would withdraw its troops from Palestine by May 15, 1948 and shelved this escalating conflict to the newly established United Nations to take action. In 1948, the UN General Assembly adopted a plan to divide Palestine into an Arab and Jewish states, in order to establish a state for Jewish refugees, the Holocaust survivors from World War II. The United Nations had at that time no means to enforce its resolution, and as a result, fighting between the parties continued and chaotic situation emerged.

I still remember as a little kid how one of my older sisters was seriously shot on her way from her Uncle’s house. She was only 16 years old. I saw neighbors carrying my wounded sister home. She needed immediate hospitalization. My parents and cousin Yousef Haddad were unable to take her to the nearest hospital in Acco city because the road to that city goes through the Jewish coastal city of Naharia, which was blocked for traffic. The other alternative was to take her northward across the Lebanese border to the nearest hospital in Sidon. That was about 40 miles far from Albassa Village. In spite of the delay on the borders, my parents and cousin managed to reach the hospital in Sidon. Unfortunately, my wounded sister couldn’t survive the internal bleeding. She died before the surgeon even started the surgery. That was a very sad moment to my parents who had to seat their dead daughter between them in the back seat of a car in order to avoid further delays in filling out formalities in such a case when crossing international borders. 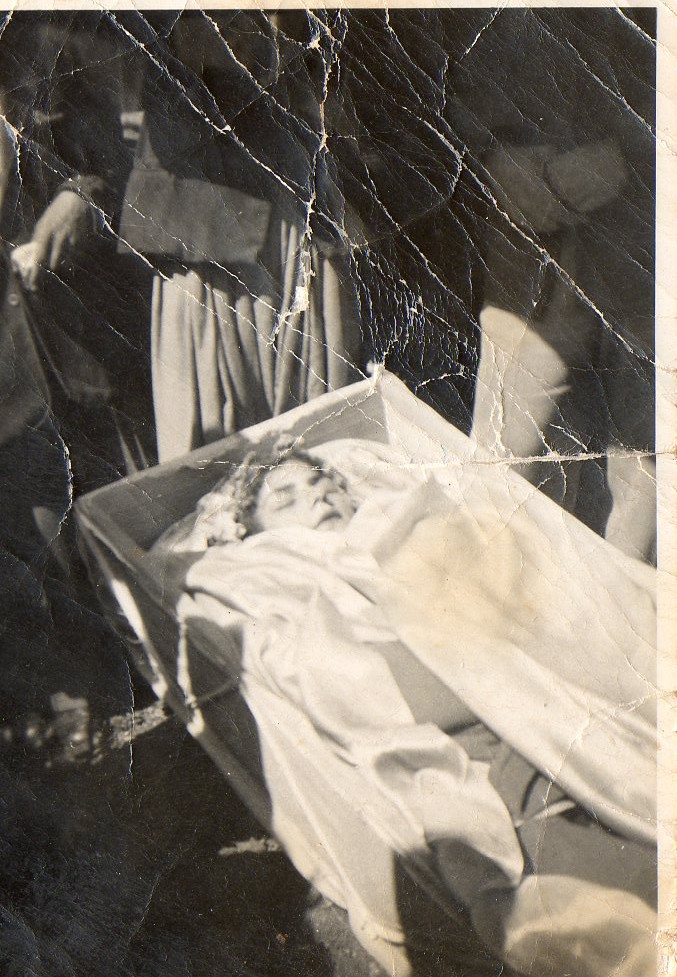 My sister was laid to rest in the Christian cemetery of Albassa Village.

In addition to our personal calamity, the death of my older sister, Keysaneh, there came the news of April 1948 of Deir Yassin Massacre. Deir Yassin was a village on the hills of the outskirts of Jerusalem where about 250 people who lived there, were massacred.

The news about this tragic event spread all over the country. Psychological warfare as well as force was used  to drive out the natives, Christians and Moslems. These people were unaccustomed to war and deliberately kept untrained and unarmed by British rulers.

An Israeli leader Yigael Alon, gives an idea of what actually happened in 1948. He says:

We looked for means which did not force us into employing force in order to cause tens of thousands of sulky Arabs who remained in Galilee to flee. The tactic of spreading rumors that all the villages would be burned worked miraculously well.”

My parents were not an exception. Our family crossed the borders on foot and reached the Lebanese Village of Alma Alshaab in two hours. My parents took only two suitcases with them and stayed as guests at a relative’s house, Reverend Bulos Haddad. They assumed, like most Palestinian refugees, that fighting would soon be over and they would be allowed to return to their homes.

On May 14, 1948, a day after our family crossed the borders to Lebanon, Haganah forces landed at the coastal shore in boats. This was in a certain sense the first operation by the Haganah Naval Forces. However, the vast majority of the village inhabitants had been evacuated earlier in anticipation of an attack. The few remaining families recalled that the occupying forces ordered all those who remained (mostly old people) to gather in the village’s church.  There the Haganah forces took a few of the young people, including  one girl and her brother, and shot them dead outside the church, ordering the others to bury them. These remaining families were also ordered to resettle in neighboring villages such as Almazrah and Miilyia. My own cousin’s family Hannah Sabbagh is still living in Miilyia since 1948. Their lands and homes and the lands and homes of those who were forced to flee, were confiscated by the Israeli government.

On May 15, 1948, the State of Israel was proclaimed on 78% of the area of Palestine. Israel destroyed 531 villages. Albassa Village, my birthplace was one of them. The war of 1948 had catastrophic consequences for nearly 800,000 Palestinians who were driven out of their homes to become refugees. Among them were more than 50,000 Christian Palestinians. Thus, about 35% of all Christian Palestinians living in Palestine lost all their possessions, their lands and homes. About half of them fled to Lebanon. The other half settled on the West Bank and in Jordan. It must be indicated that the United Nations recognized Israel as a new member on condition that it carries out UN resolution194, which would allow the Palestinian refugees to have the choice between reinstitution and compensations. Israeli governments have repeatedly ignored UN resolution 194 and many other resolutions.

In 1967, Israel occupied by force the rest of Palestine (22%). The occupation has been the longest in modern history, oppressive, brutal, and dehumanizing. Palestinian land has been systematically confiscated, human rights violated, and people systemically humiliated.

Approximately, one and a half million eligible Palestinian refugees in neighboring Arab countries are still receiving basic rations of 1,500 calories daily from the United Nations Relief and Work Agency ( UNRWA) on a budget of 7 cents per person per day for all services including food, housing, medical care, and education. The Palestinians of Diaspora have the highest literacy rate in the Middle East. In an UNESCO report of 1964, out of 120 countries reporting data, Palestinians ranked 13th in percentage of elementary aged children in school. They have also a high percentage of university degrees, and a significant element in the professional, skilled and intellectual elite through the Arab World, working in universities, research centers, business, and the arts.